Tripel Flop: The story of a Belgian Tripel Ale

No, sadly this is not an attempt to re-live my figure skating days. It is the story of my first all grain homebrew batch - a Belgian Triple Ale that was indeed a flop. 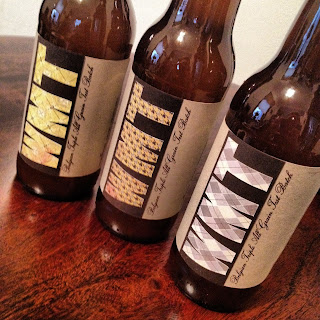 After attending a seminar by Brooklyn Brew Shop at Brewcamp on transitioning to all grain I purchased my 1 gallon kit and was ready to start experimenting. My trip to Belgium had left me desperately wanting to brew my own batch of Belgian style ale so I started with Brooklyn Brew Shop's "Well-Made Tripel" recipe. It called for Belgian Pilsner malt, Caramel 10 malt, East Kent Golding and Saaz hops, Belgian Candi Sugar and Wyeast Belgian Abbey 1218 yeast. The process itself was easier than I expected though efficiency wise I spent the same amount of time as I would brewing a 5 gallon and only yielded 1 gallon. The instructions called for 15 days in the fermenter (no secondary) followed by bottle conditioning with honey or maple syrup. About 3 days after bottling I came home to a frightening mess - exploded bottles, glass shards everywhere and a foul, sticky floor (yes, yes empathetic groans, thanks). Being the first time I've experienced this it was pretty upsetting. I took the few remaining bottles and refrigerated to see if I could calm the carbonation and potentially save. It ended up being a lost cause. I tasted it after a few weeks and the beer had an awful funk/rot taste. 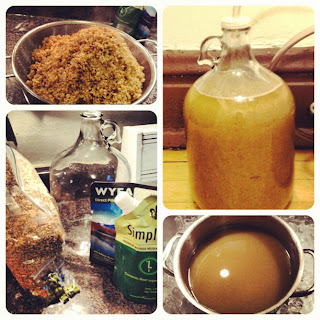 Although I appreciate the concept of 1 gallon recipes for the sake of transition without the additional equipment cost as well as the opportunity to experiment with perhaps some funkier ingredients - I found their technique to be a bit flawed.

- Too time consuming for a 1 gallon yield
- Although the cookbook was "user friendly" the directions were not specific enough in terms of times, temperatures, no mention of target OG/SG readings which is crucial in producing a successful batch
- I've found bottle conditioning with honey/maple syrup to be problematic - higher fermentables than table/priming sugar especially with high gravity beer causes exploding bottles
- I have a hard time accepting a primary only fermentation. For the sake of clarity I appreciate the opportunity to be able to filter and test levels along the way.

On a positive note the packaging concept I had for this batch was definitely one of my favorites (second to Not Your Honey). Since it was a small batch I decided to hand cut WMT (Well-Made Tripel, oh the irony) letters from 8 unique European inspired plaid and damask patterned papers, layered with craft papers mimicking the depths of rich patterns and textures I came across in the pubs and restaurants of Brussels.