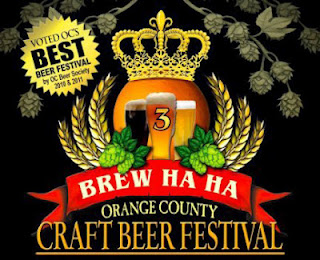 This past weekend I ventured out to sunny California to check out some West Coast craft beer, as well as attend the 3rd Annual Orange County Craft Beer Festival located in scenic Oak Canyon Park in Silverado, CA.

This event is partnered with the Local 3631 Firefighter's Union. Boasting over 60 Award winning Breweries serving 150+ beers on tap, it raises thousands of dollars for the Fallen Fire Fighters Relief Fund.

All of the big breweries of the regional west were in attendance - Sierra Nevada, Lagunitas, Stone, Avery, Firestone Walker, North Coast Brewery as well as numerous smaller California breweries.

My strategy was to try things I haven't had before from some of the West Coast's craft beer trailblazers as well as discover some of the up and coming breweries. We found that most of the larger breweries had two tap lines, simply showcasing their flagship beers. I have to admit that I'd hoped based on my experience with Midwest beer festivals, that this would be a venue to try some special/limited releases but this was unfortunately not that case. The smaller, local breweries really came out to shine!

Breweries To Keep An Eye On
• Hangar 24 Craft Brewery (Redlands, CA) www.hangar24brewery.com
With a impressive list of quality crafted beers and vintage branding that can't be overlooked this local favorite caught my eye. I had a chance to visit their brewery - stay tuned for a dedicated write up.

• Ritual Brewing Co. (Redlands, CA) www.ritualbrewing.com
A craft brewery opening this fall, this was their first festival and they had quite a showing. The Wit's End was refreshingly delightful.

• Monkish Brewery (Torrance, CA) www.monkishbrewing.com
These guys did not have their own tent, but were being served by Brü. Their Belgian spiced beers - Rosa's Hips (Belgian Brown spiced with rose hips) and Crux (Belgian Single spiced with elderflowers) were by far the most impressive I had while in Southern California. Check out their new tasting room right outside of LA. 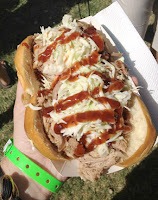 • Brewcakes (Redlands, CA) www.brewcake.com
A unique bakery specializing in desserts infused with craft beer, wine or liquor. We tried a sampling of craft beer infused cupcakes that were delicious! 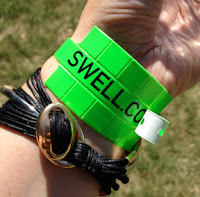 • Wrist bands - pretty cool each little tear off square was a drink ticket, no worries about losing paper tickets
• Overhead Misting Cords - such a life saver on a hot day
• Location - great amount of shade, not over-crowded

Glass Half Empty
• No cell reception - hard to meet up with people
• No map handouts - hard to know which breweries were where for planning/strategizing
• Brewery representation - as a beer geek I would have loved to see more people from the breweries who could answer questions about the beers on tap.

Overall the festival was spacious, delicious and well planned. Thanks so much O.C. Brew Fest and O.C. Firefighters Union, we had a fantastic time!