This past month we collaborated with Katherine Anne Confections in Logan Square for our monthly Chicago Beer Gals meetup. Last February I experimented with making my own beer infused truffles as well as baking chocolate stout cupcakes (recipes here). This year as my palate and curiosity for beer knowledge has increased I was eager to tap into how to pair beer with desserts, like chocolate. Katherine was a fantastic collaborator. A quick visit to her shop opened my eyes to how experimental one could be with confections, much like craft beer. She has developed hundreds of truffle recipes alone, infusing everything from coffee to spices, herbs, liquors and has plenty of experience pairing chocolate with beer and wine. We had a lot of fun talking about flavors and put together some really interesting and unexpected dessert and beer pairings that took us through a variety of different sensations and flavor combinations.

Pairing beer and chocolate, why it works -

For a many years rich chocolatey desserts have been considered a natural pairing for wines and aperitifs. The great thing about both confections and craft beer is that there is a lot of variance in the flavors that you get, so while some of the sweeter wines or ports would be magical with milk or dark chocolate, most wines have very tannic qualities that can coat the tongue and overpower characteristics in desserts. As beer styles have expanded and become more popular there has been a lot of debate by people in the beverage industry, arguing that beer is actually a much more suitable pairing for chocolate for a number of reasons. The first is the overall “mouthfeel” experience. The ingredients in beer make it a complex beverage. Beer is made up of water, malts/grains, hops and yeast. The malts/grains are going to be the body of the beer providing sweetness and a range of flavors from bready, toastiness to caramel, chocolate, roasted coffee. The hops are used to bring in a range of bitterness, but also have characteristics like fruitiness, floral, citrus, pine, woody, earthy. And finally, you have the yeast used to ferment the beer - which also can bring in spices, fruitiness, floral notes. Carbonation is the second big factor, which plays a huge role in the overall “mouthfeel”. You’ll notice when you eat something sweet it will coat your tongue - especially chocolate or anything that has rich butter fats. When you sip the beer, the carbonation works as way to activate your taste buds and create a more rounded flavor experience.

Tea & Passion Fruit Marshmallow paired with Unibroue La Fin Du Monde Belgian Triple Ale (Beer Advocate 96/100 - World Class rating for it's category).
Unibroue is from Quebec and has won more medals and awards than any other beer brewed in Canada. It’s a Belgian Style Tripel Ale. What I find so fascinating about the Belgian style of beer is that it has a ton of citrus and spice notes that are attributed solely to the yeast that is used to ferment the beer. Sometimes you’ll pick up floral or spice notes from hops, but in this case there aren’t any spices or additives as you’d see with other beer styles. This beer also provides a really high carbonation level with tight effervescence bubbles, much like champagne. These two create a "harmonious" pairing, meaning they have shared characteristics that work together. Passion fruit tends to be a more acidic fruit, which is being balanced by the addition of tea as well as the high sugar content in the marshmallow. When you taste the marshmallow and beer together, you'll find the shared spice and fruit characteristics compliment each other. The carbonation is nice here to invigorate the taste buds cut some of the sugariness of the marshmallow. 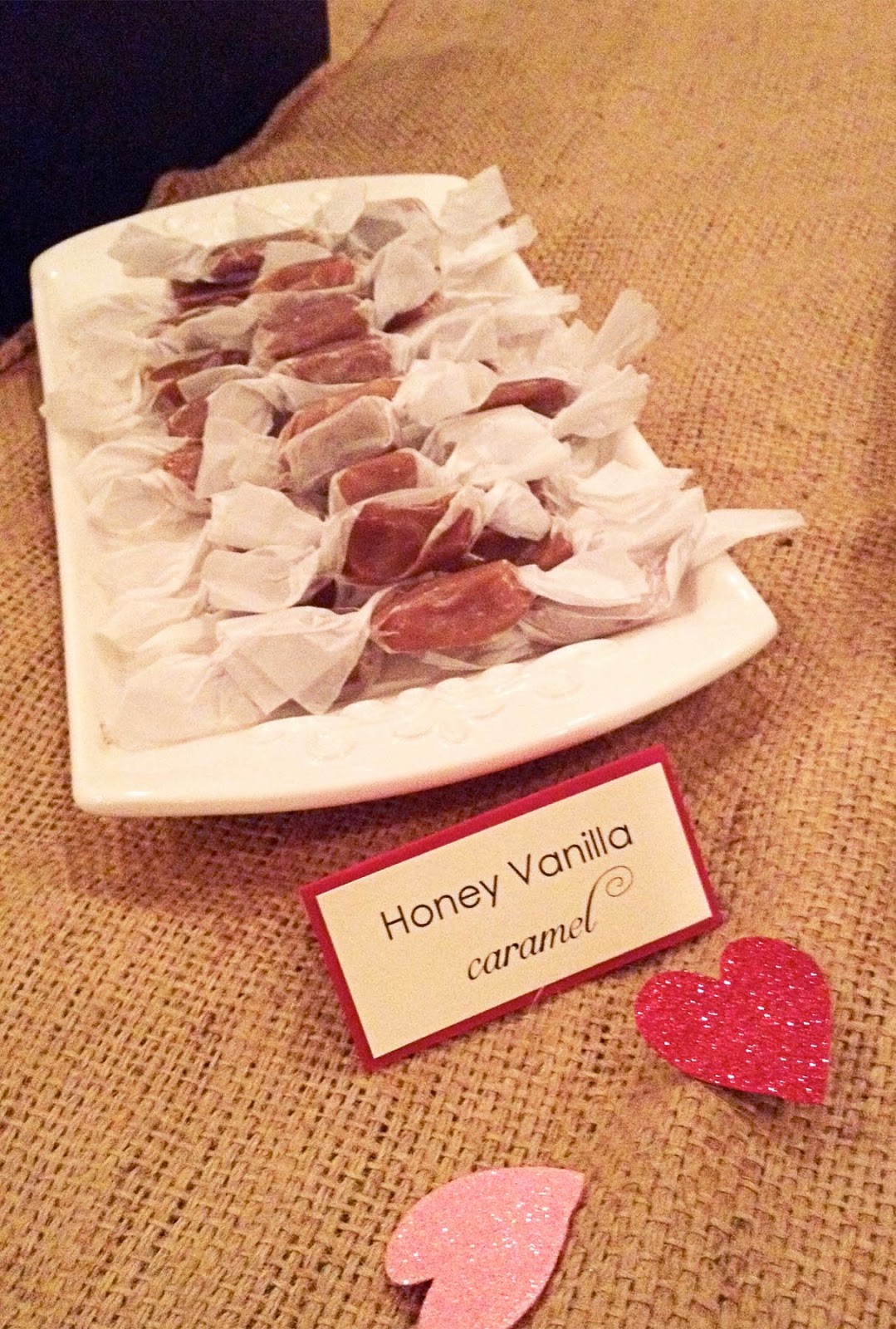 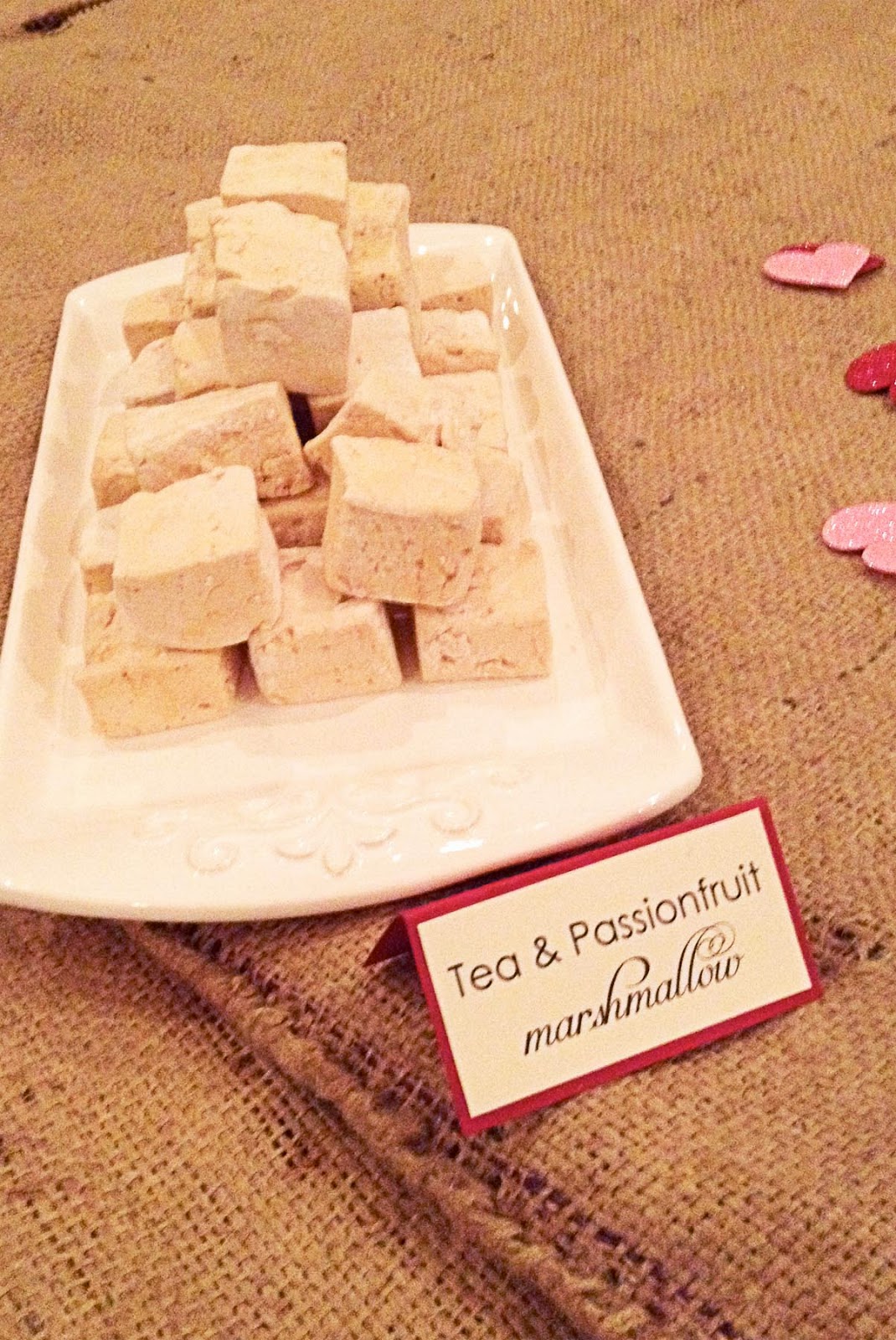 Honey Vanilla Caramel paired with Half Acre Alpenglow Dark Ale (Beer Advocate rating 85/100). Alpenglow is an American Black Ale, which has lighter body than a stout, a smaller amount of roasted malts, giving it just enough color and higher hop bitterness to balance the sweetness of the malt. This beer starts sweet and caramely and finishes roasty and dry with some notes of dried fruit/raisins. Because of the complexity I would consider this a "contrasting" pairing as the dark malt and hop characteristics of the beer work to balance the sweetness of the caramel. The honey and vanilla in the caramel bring out the malt characteristic in the beer. You get a continuous roundness of the ingredients each time you taste them together.

Java Truffle paired with Deschutes Obsidian Stout (Beer Advocate rating 94/100)
Obsidian has won medals both in the US and Internationally in the dry stout category.
It’s a robust stout with pronounced notes of dark chocolate and espresso. Dry Stouts use Pale/Munich malts in the base of the beer, found in lager and pilsner beers, which are very clean and crisp. This malt bill allows the specialty roasted malt and black barley to really shine through and give a nice, dry finish. This would be another "harmonious" pairing as the truffle and beer have very similar dark, roasty characteristics, with the beer having slightly more bitterness in the finish that is going to work well with any dessert that has the buttery, creamy characteristics of chocolate. Again the carbonation is such a complimentary aspect of the pairing, swirling the rich chocolate around for a really satisfying flavor experience. 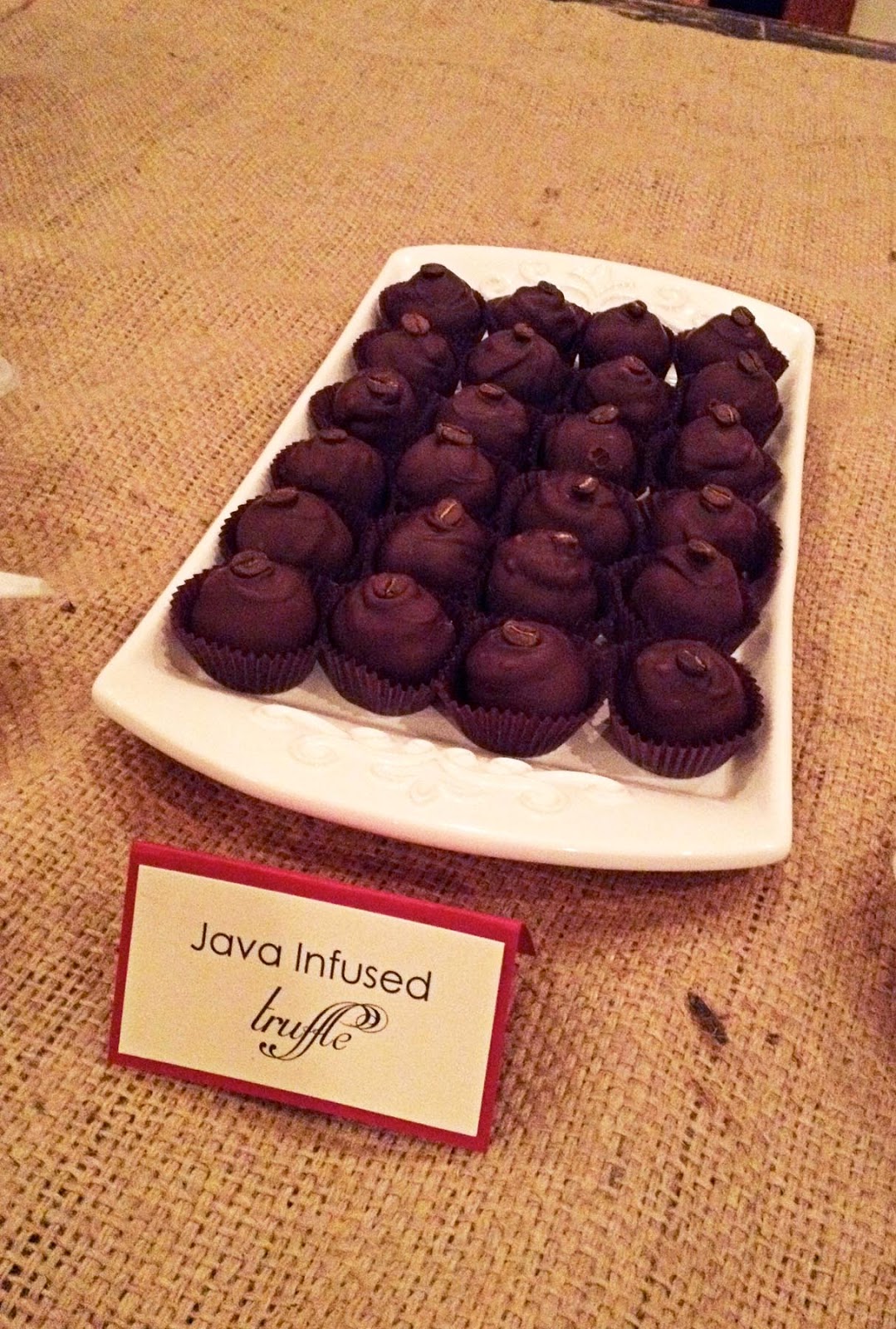 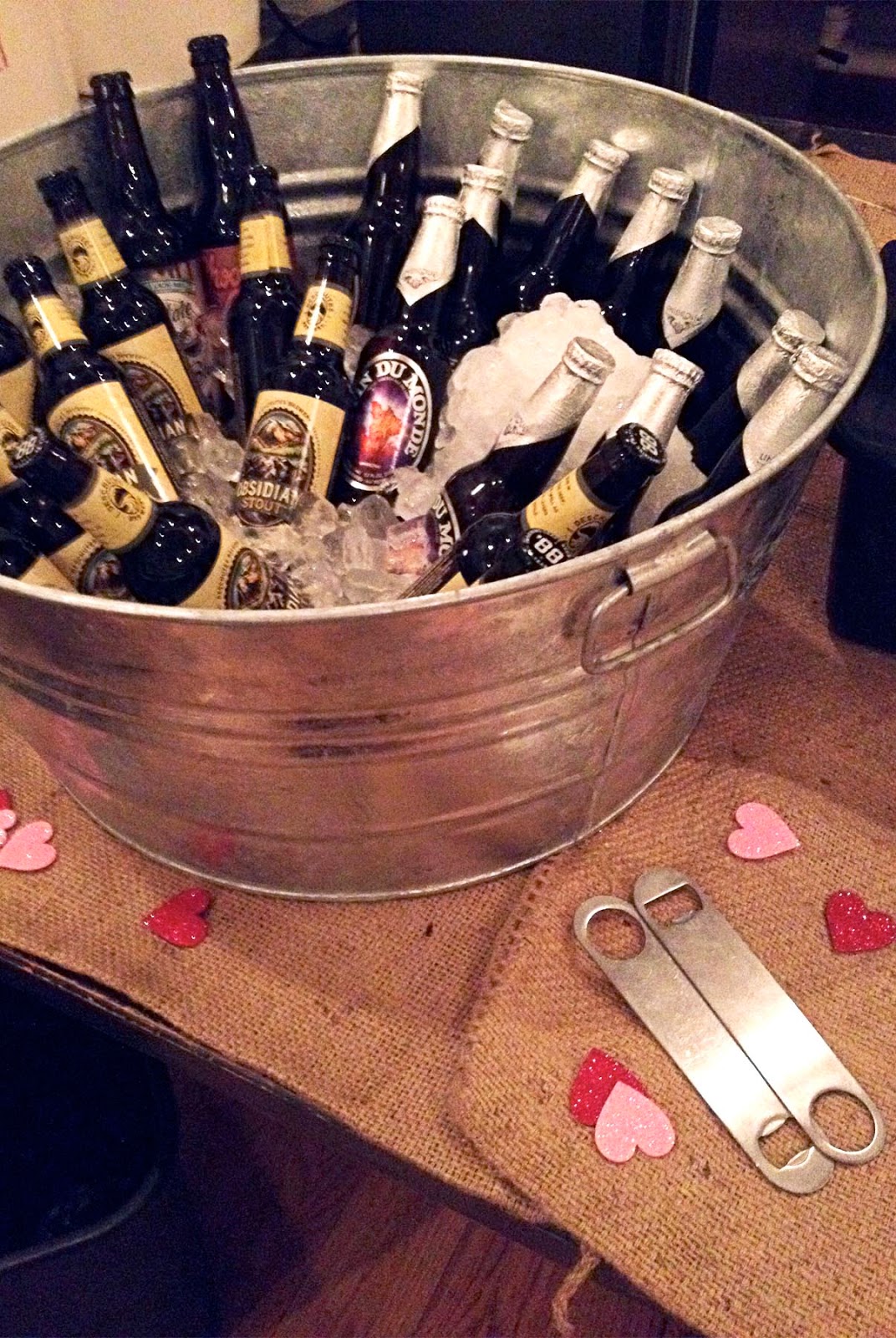 Some additional beer pairings we recommend, which can be found at Bottles & Cans:
- Fruit or lambic beers, such as Lindemans with chocolate mousse
- Spiced Stout such as Clown Shoes Chocolate Sombrero, with a ginger dessert
- Wheat Ale, such as Lagunitas A Little Sumpin’ Sumpin’ with lemon or honey desserts
- Barleywine such as Anchor Old Foghorn with creme bruleé or fruit tart
- Barrel-Aged Stout, such as Goose Island Bourbon County Brand and a Chocolove Dark Chocolate with Raspberry chocolate bar (trust me)
Posted by Kimski at 1:29 PM